May 25, 2021 | The University of Arkansas for Medical Sciences (UAMS) broke ground today on an expanded Radiation Oncology Center, which will be home to Arkansas’ first Proton Center.

The Radiation Oncology Center, part of the UAMS Winthrop P. Rockefeller Cancer Institute, already offers cutting-edge technologies to provide the latest radiation treatments. It will continue to provide those services, as well as new ones using the expanded capabilities of three new linear accelerators, as it relocates in 2023 to a new 52,249 square-foot-building facing Capitol Avenue, between Pine and Cedar streets. 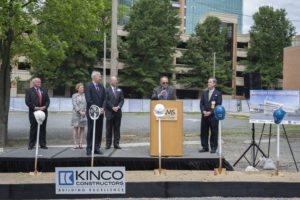 The new three-story structure, located southeast of the BioVentures building, is being built primarily to accommodate a proton center — one of fewer than 40 that exist nationwide — in partnership with Arkansas Children’s, Baptist Health and Proton International.

“We are fortunate that UAMS continues to broaden the medical-care horizons in Arkansas,” said Gov. Asa Hutchinson. “High-tech advances such as the Proton Center will provide first-rate care for more people as well as attract even more world-class doctors and researchers as UAMS continues its pursuit of the National Cancer Institute Designation. The partnership of UAMS with Arkansas Children’s, Baptist Health and Proton International ensures that Arkansas will continue to be a place of healing for thousands of cancer patients.”

An alternative to radiation therapy, proton therapy is a state-of-the-art technology that uses a precisely focused high-energy beam to target tumors, often in hard to reach areas, without affecting surrounding tissue. Proton therapy is particularly effective in treating solid cancer tumors, including tumors of the brain, spine, head and neck, lung, prostate, colon and some breast tumors.

It is ideal for pediatric patients because the high-energy proton particles it delivers to kill tumors limits radiation exposure to healthy, growing tissues. UAMS’s radiation oncology center is the only one in the state that treats children.

“UAMS is excited to be able to offer this advanced technology to patients in Arkansas so that they will no longer have to leave the state for this highly effective treatment,” said UAMS Chancellor Cam Patterson, M.D., MBA. “This is part of our continued commitment to improving the health and well-being of Arkansans.”

The closest proton centers to Arkansas are in Memphis and Shreveport, Louisiana. 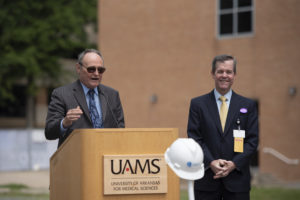 Michael Birrer, M.D., Ph.D., director of the Cancer Institute, said the proton center “brings cutting-edge therapy to our patients and will be the basis of many new and novel clinical trials that will benefit our patients and move the cancer research field forward. It will also help us on our journey to receive National Cancer Institute Designation.”

“The collaboration on this new proton therapy center means children with cancer in Arkansas will now have access to some of the most advanced care available in their home state,” said Marcy Doderer, FACHE, president and CEO of Arkansas Children’s. “By working together as health systems, we are proving that teamwork dismantles roadblocks that have traditionally kept children from reaching their full potential.”

“Ensuring the best care for patients and responding to the changing health needs of Arkansans are central to Baptist Health’s mission,” said Troy Wells, president and CEO of Baptist Health. “This strategic partnership with other leading health care providers will greatly benefit Arkansans who need this cutting-edge cancer treatment.”

The three new linear accelerators — machines that customize high-energy X-rays — provide edge radiosurgery, a specialized nonsurgical technique used to destroy tumors in the brain and spine with end-to-end accuracy of less than 1 millimeter; radiotherapy with motion management, which controls radiation directed at tumors that move as patients breathe; and adaptive therapy, the most advanced form of cancer treatment, which allows clinicians to adapt to daily changes in the tumors’ shape and position over the course of treatment to better target the cancer and spare normal tissues. 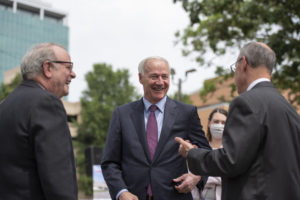 The first floor of the new building will include a consultation room, a computerized tomography (CT) room, treatment rooms, clinical rooms, an exam area, a staff lounge and a conference room, as well as several physician offices in the clinical space.

The proton machine will be housed on the second floor, as will a CT room to prepare patients for proton therapy, a high-dose radiation (HDR) room, gowning rooms, recovery rooms, an anesthesia room, work rooms, eight exam rooms, a large work room for physics staff and more physician offices.

The third floor will house a cooling room for the proton machine, as well as mechanical and storage areas. It will include some extra space for future needs.

An enclosed heated and cooled skywalk will connect the building to UAMS’ Parking Deck 3. 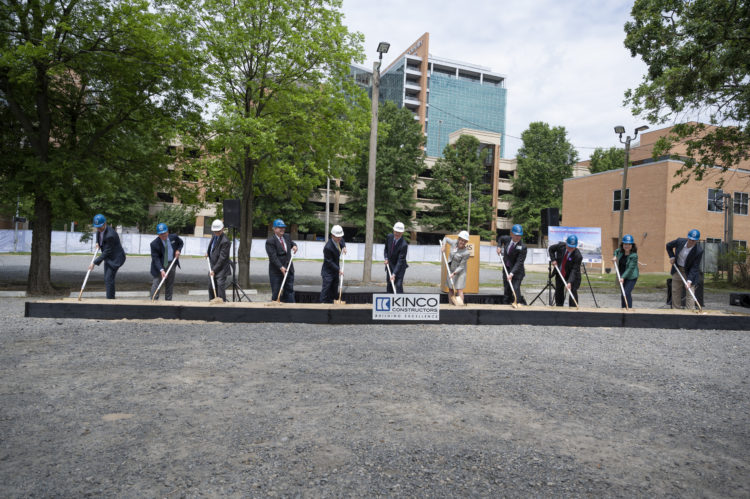